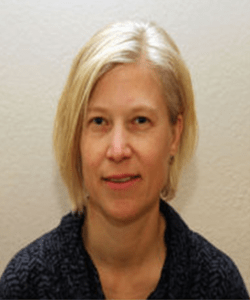 Supporting Comments: Alexandra Ros has been a creative, energetic and insightful young faculty member. The manipulation of single cells and truly unique isolation and concentration strategies for complex mileux of biomolecules contained therein will be a breakthrough for biological and medical studies. She has been able to develop new physics and chemistry on a very fundamental level and drive those advances intellectually all the way to a final impact on patient care. There are many steps in between her fundamental work and application in the hospital or clinic, but this foundational groundwork must be accomplished first so that the true biochemical information can be unlocked from functioning biological systems. From these core creative ideas, she has been very productive in terms of funding (NIH, NSF CAREER award, see CV), establishing a research group (seven students and postdocs), and peer-reviewed publications (nine since arriving at ASU, 33 total).

During my masters (at Heidelberg University, Germany) and PhD (at EPFL, Switzerland) studies I developed interest in novel bioanalytical techniques. The aspect of developing a method to improve current analytical challenges drives my interest in bioanalysis. For example, I have experienced how such – initally fundamental and basic – studies can lead to marketed analytical instruments applied by researchers worldwide to reveal current bioanalytial challenges. My graduate research focused on off-gel electrophoresis and it is very rewarding to see that this technique is now marketed by Agilent Technologies. This example inspired and motivated me to pursue a career in bioanalysis. I am convinced that major breakthroughs in resoving key biological problems will greatly depend on our improvement of bioanalytical tools.

My research centers on novel bioanalysis techniques evoked by phenomena occuring in nano- and microenvironments that can be exploited for further bioanalytical applications. In contrast to traditional miniaturization techniques down-scaling existing approaches, my research is innovative and unique as it employs nano and microenvironments to allow for novel migration, separation, conentration, fractionation and analysis techniques. For example, I am among a small group of researchers in the world exploiting dielectrophoresis for analysis of biomolecules, especially proteins. Dielectrophoresis has a large potential for bioanalysis, as it can probe intrinsic biomolecular properties based on polarizability influenced by shape, charge, deformation, chemical composition (e.g., nucleotide sequence or amino acid composition). Furthermore, dielectrophoresis has the potential to concentrate biomolecules thereby improving detection limits, allowing detection in complex samples, with label-free approaches and hyphenation to orthogonal techniques. In my habilitation thesis, I could show for the first time that insulator-based dielectrophoresis can be employed for the separation of DNA in microfluidic systems. My current and future research will focus on the detailed understanding of dielectrophoretic properties of DNA and specifically in investigating protein dielectrophoresis. With this work I will provide the fundamental for the application of dielectrophoresis of biomolecules in the future.

After showing dielectrophoresis of DNA, my interest expanded to proteins. Because proteins are much smaller than the previously tested DNA, two major challenges arose:

My career goal is a tenured faculty position with future rank of a full professor. With my research and teaching activities I plan to provide a basis of excellence in novel bionalaytical techniques, educating and mentoring undergraduate and graduate students to succeed in bioanalysis for their future career in academia and industry. I expect my work having impact in migration techniques and single cell analysis not yet achievable with current approaches. My focus lies on the implementation of tailored micro and nanoenvironments to investigate migration mechanisms of biomolecules that are not yet well understood and for which analytical applications and tools are not yet available. Those include the use of dielectrophoresis) and non-intuitive migration mechanisms such as non-equilibrium phenomena. Furthermore, I am interested in single cell analysis techniques coupling microfluidics manipulation of single cells to sample preparation on chip for direct MALDI-MS analysis. I expect to evolve to an expert in these techniques, be recognized in the field of bioanalysis for fundamental studies but also for applications based on those phenomena. As a result of my efforts I expect to contribute to challenging bioanalytical problems including ultra-small sample amounts and mixtures of vast biological complexity.

Bioanalysis will arise to one of the most important analytical disciplines in the future. The huge diversity inherent to living organisms, their interactions, function or malfunction are privotal for the challenges societies will face in the future. As we become older, deaseases associated to the elderly need to be better undestood to provide remedy or even cure to assure appropriate life quality. Other threats, such as cancer, are still not understood to a sufficient level and the current challenges in providing cures will only succeed with our ability to detect the associated biological roots. Other challenges arise on the quality of our crops and foods to sustain supply for the growing societies. Bioanalysis will play an important role revealing biological diversity and allowing the control and safety of food supplies. A consideralbe amount of fundamental scientific emphasis has to go into novel bioanalytical tools and techniques to approach the challenges faced. Ony with a more refined methodology will the revelation of these important biological processes be possible.

Reasoning: As motivated above, I believe dielectrophoresis will become an important analytical tool in the future. With this work, we showed for the first time that insulator-based dielectrophoresis can manipulate and concentrate diagnostically relevant proteins. Our work can be distinguished from other published data as we take great care to investigate protein monomers and not aggregates and further study the molecular properties underlying protein dielectrophoresis.