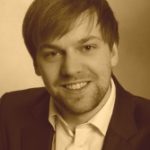 Sebastian Püngel graduated with a BSc from University of Applied Sciences Emden (Emden, Germany) followed by a MSc from Beuth University of Applied Sciences Berlin (Berlin, Germany) with a focus on cell culture technology and recombinant protein production. In 2017, Sebastian joined Univercells (Belgium, Germany) as a Program Manager for recombinant proteins and is leading multidisciplinary project teams to ensure successful delivery of the project’s objectives.

For decades, tailored individualized medicines are on everyone’s lips, but caused by extremely high regulatory restrictions, interests of installed pharma players and other reasons, even precision medicines for a subgroup of patients reach the market slowly. Recent remarkable achievements in cell therapies are a step in the right direction but are quite limited.

To simplify the pharmaceutical evolution, a comparison to the textile industry is reasonable. In the very beginning, production of clothes was limited to the availability of tailors producing individualized clothes. In conjunction with industrialization, a ‘one-size fits all’ approach was able to cover population needs. Further on, population was divided in subgroups and standardized cloth sizes were introduced, covering today a high percentage of the population with acceptable deviation. Nowadays, bespoke clothing is still produced by tailors but noticeably associated with high quality and costs, in comparison to standardized large-volume manufacture.

The same principle is applicable for the pharmaceutical industry. Until the early beginning of the 19th century, local pharmacists were producing individualized products for their patients such as botanical ointments, until industrialization and a deep understanding in isolation and later synthesis of chemical compounds led to the development of bulk substances as ‘one size fits all’ for different indications such as pain relief (morphine) or anti-inflammatory (aspirin). Today we are (partially) on the way to define different subgroups within those indications, calling for new corresponding highly specific treatments. However, such individualized medicines or pharmaceuticals are at the very beginning and, based on information of leading pharmaceutical companies, in general neither scientifically nor economically reasonable [1]. The major difference is that classical broad-indication treatment, if unfit for a patient, might lead to adverse effects, sometimes lethal, whereas tailored medicines are expected to achieve the highest effectiveness and safety [2]. The main question is, why is there no ‘tailor’ producing the needed treatment for a single person?

Reasons are complex, starting from technical issues for (1) diagnostics development, via (2) regulatory hurdles for the approval of tailored medicines and ending with (3) current production paradigm.

Diagnostics to deliver individualized treatments are highly complex and the deeper the characterization of disease the more tailored a treatment could be. Diagnostics should therefore include all so-called ‘omics’ approaches. High accuracy and sensitivity of mass spectrometric analysis is well suited for individualized medicine and are able to analyze proteomes of clinical specimens like tissue, bodily fluids or cultured primary cells. Even though such methods are difficult to develop, relative differences in proteomes give an unbiased comparison between normal and affected samples and deliver potential biomarkers. Capable orthogonal methods to proteomics are genomics. In the past classical, cDNA library screening approach led to the discovery of multiple biomarkers. However, this approach is labor-intensive and delivers only low-throughput, whereas raising technologies as whole-exome sequencing show advantages to identify non-synonymous mutations between patients with same indications. The Centers for Medicare & Medicaid Services (CMS; MD, USA) recently announced to cover the costs of cancer gene tests that have been approved by the Food and Drug Administration [3]. At this point the CMS will only cover these tests for patients with Stage 3 and 4 cancers. In addition to tracking the outcomes, this testing will generate large volumes of genomic cancer data, supporting hospitals and diagnostic companies who are gathering evidence to validate their own tests. It will also allow pharma companies to fill their targeted treatment trials with ‘genetically-matched’ patients. This data might have a significant impact on improving patient care and on the future of individualized medicine.

Contrary to the current biomanufacturing paradigm, where centralized large-volume facilities produce chemical and biological prescription medicines for a worldwide supply, tailored individualized medicines raise the needs for local, small-amount production. As tailored medicines target non-contagious diseases like cancers, autoimmune and other genetic diseases as well as metabolic diseases, the corresponding treatments are mostly correlated biological products as proteins, cell and gene therapies. These new products, produced in small quantities, trigger novel production challenges calling for bioproduction innovations. Recent efforts in cell therapy production give insights in a possible way of production for individualized biologicals or vaccines. While some cell therapies are expected to be produced by their developers or associated CMOs, a number is expected to be produced closer to the patients, introducing the trend for local, in-hospital and even bedside production [4]. However, rare availability of related equipment and bioprocessing to bring tailored medicines to the market decelerate the overall progressing.

Univercells developed a technology to produce biopharmaceuticals in a sufficient amount in the shortest time and lowest possible infrastructure footprint. These multi-product µfacilities are designed by disruptive disposable integrated process architecture, which is based on intersected unit steps and offers lowest CAPEX and OPEX needed for precision or individualized medicines.

The next step is of course the production of individualized medicines where such novel manufacturing methods are developed in conjunction with on the one hand diagnostic companies and on the other hand hospitals, universities and other institutions with the same ambitions for an innovative approach and business model of an ‘all in one’ solution for individualized medicines e.g. proteins, peptides, antibodies, vaccines and others. Recent FDA statements are promising that increased demand in setting up regulatory guidelines might lead to unconventional strategies like validating the process instead of products. Within the European Union such products may fall in the scope of Directive 2001/83/EC Article 3 points 1 and 2 on Human Medicinal Products, which is related to preparations of medical formulations within the pharmacy with a medical prescription for an individual patient.

In summary, there is a paved way to individualized, tailored biopharmaceutical medicines, which is scientifically and economically possible with all related benefits for patients, pharmacists, doctors and the healthcare system.

Bioanalysis of biotherapeutics at a crossroad

Could eosinophils be biomarkers for chronic obstructive pulmonary disease?