Through the integration of the latest nanotechnology and bioengineering, scientists have begun to develop a wide range of microfluidic chips. In the list below we explore some of these exciting recently developed devices.

What is a lab-on-a-chip? Click here to learn more about LOC technology! 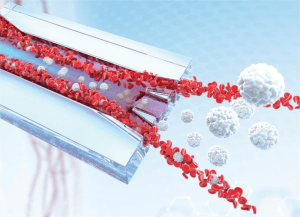 This device, developed by researchers from the University of Illinois (IL, USA) and Queensland University of Technology (Australia), could be used to isolate individual cancer cells from patients’ blood.

Cancer cells are present in extremely small quantities in the blood. As Ian Papautsky, Principal Investigator and Professor of Bioengineering at the University of Illinois explains: “A 7.5 mL tube of blood, which is a typical volume for a blood draw, might have ten cancer cells and 35–40 billion blood cells; so we are really looking for a needle in a haystack.”

To find the proverbial needle in a haystack, this novel device capitalizes on inertial migration and a proposed shear-induced diffusion mechanism to separate cancer cells from whole blood as it passes through microchannels formed on the surface of the chip.

Since the publication of this research, scientists in Papautsky’s laboratory have been investigating the shear-induced diffusion mechanism. In a follow up paper, published in Lab on a Chip journal, Papautsky reports more data to support a counter-intuitive mechanism of size-based migration of cells in whole blood flow. 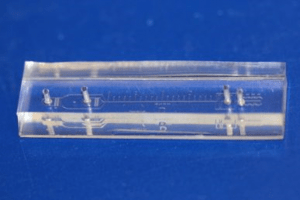 In a flowing sample of whole blood separated by a central stream of PBS buffer, particles such as suspended circulating tumor cells migrate towards the center of the channel, despite interactions with the blood cells.

This size-dependent migration of particles in whole blood flow could have a profound impact on cell sorting applications and could form the basis of new techniques to separate circulating tumor cells from blood with operational simplicity and high throughput.

This device could improve forensic blood residue detection at crime scenes as well as enhance some immunoassays by improving the detection limit for luminol chemiluminescence.

In 1937, Walter Specht, a forensic scientist, recommended the use of 3-aminophthalhydrazide for forensic blood detection. This substance, known as luminol, has been used ever since. Luminol exhibits chemiluminescence and glows a bright blue color when activated by an appropriate oxidizing agent such as the iron in hemoglobin.

This device is capable of performing high resolution measurements of the lateral position of tiny flowing particles (3.6 μm beads).

As an increasing number of microfluidic devices are developed, it becomes more important to evaluate the efficiency of microfluidic cell focusing, separation and sorting. Traditionally, tracking the lateral position of single cells and particles has required either, multiple off-chip analyses, the use of flow cytometry or complex high-speed imaging.

These complex analyses and set ups could become a thing of the past thanks to a microfluidic impedance flow cytometry device designed by a team of researchers from Singapore University of Technology and Design (SUTD, Singapore).

The device features a novel N-shaped electrode, designed to collect a differential current. This current is then used to encode the trajectory of the particles flowing through the microfluidic device.

The device generates an analytical expression – based on the relationship between the generated electrical current and the position of the flowing particle – to allow the measurement of the lateral position of the particles.

Simulations showing cCPCs, getting stuck between micropillars in the microfluidic device. Image credit: Lidan You (University of Toronto, ON, Canada)

This device could reduce the need to perform invasive tumor biopsies for cancer detection, replacing them with a rapid and non-invasive liquid biopsy.

In severe cases of multiple myeloma, malignant cells can leave the bone marrow and enter the blood stream. Once in the blood stream, these cells become known as clonal circulating plasma cells (cCPCs).

Traditional methods have limited use in the detection of cCPCs due to the low blood concentrations. However, this recently developed device could overcome these shortfalls by using a microfluidic platform.

5 Could a new portable microfluidic device be used to rapidly identify viruses in clinical samples?

A portable, handheld lab-on-a-chip device capable of identifying viruses directly from clinical samples is a very exciting prospect. Such a device could revolutionize global infectious disease detection and management.

A portable platform recently developed and validated by scientists at Pennsylvania State University (PA, USA) and New York University (NY, USA) could be an indication of what the future holds for viral detection.

The device contains carbon nanotube arrays which are engineered to capture viruses based on their size. These nanotubes are integrated to a Raman spectroscopy system which is used to identify the captured viruses.

The lab-on-a-chip device, called the VIRRION, could be capable of capturing and detecting viruses in minutes, with up to 90% virus specificity. All of this could be achieved using a portable device that is only a few centimeters across in size – potentially life saving in remote locations where lab facilities are inaccessible.