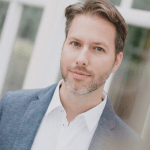 Neil Henderson has an academic background within respiratory and inflammation disease biology. He has worked for AstraZeneca in the UK and Sweden performing GxP biomarker study analysis predominantly using ligand-binding assays. Since 2015, as part of Translational Biomarkers and Bioanalysis team, Neil has been developing and applying bioanalytical strategies for pre-clinical new modality therapeutics and identification of novel safety biomarkers.

As with many companies, the historical success of AstraZeneca was primarily based upon developing and marketing small molecule drug moieties. Going into the mid-to-late 2000s, through the partnering and subsequent acquisition of Cambridge Antibody Technology and later purchase of MedImmune, a greater number of large molecules, predominantly in the form of antibodies and biologics were contributing to the overall pipeline diversity. Then in the last 5 years, through increased partnerships with external companies, there has been an explosion in the types of drug molecules – the so-called ‘new modality’ drugs – which includes antisense oligonucleotides (ASOs) and modified messenger RNA (mRNA). In fact, the inclusion of these molecules led to the creation of a dedicated bioanalysis group within AstraZeneca to provide PK/PD and safety data for investigative projects and further refined the operating model for regulatory-facing bioanalysis, which is now conducted by our preferred providers. Initial preclinical discovery bioanalysis support to these projects were mainly focused upon LC–MS/MS analysis of ASO concentrations in specific target organs and high accumulating tissues, such as the liver, or for tissue/plasma levels of the mRNA-encoded protein by commercial ligand binding assay (LBA). Then as projects progressed, the level and diversity of bioanalytical support evolved too to provide meaningful data for the project team’s novel questions. For example, the team needed more sensitive methods to measure ASOs, to fully track lower concentrations in vivo over time, and so have had to add hybridization ELISA (HELISA) and HPLC-fluorescence probe methods (HPLC-FL) to the bioanalytical repertoire for PK and known-metabolite assessments respectively. Good communication with our collaborative partners has helped in the establishment of the many novel assays and workflows both internally within the team and with external vendors who deliver our regulatory facing study support.

One observation at the time was the lack of direct bioanalytical regulatory guidance for the technologies typically applied within the field of oligonucleotides, particularly for the expectations on modified mRNA bioanalysis. It meant that ‘we’, as part of the wider bioanalytical community, had to plug the gap, so to speak: “what did we think needed to be measured, and how?” especially when the data ultimately may form part of submissions. The encoded protein could be measured by commercially available (or bespoke) LBA or by large molecule LC–MS/MS methods, using established bioanalytical guidance documents to meet investigative and/or GLP requirements. Moreover, the basic approach to maintaining protein stability in a sample, during processing, was essentially well established. In comparison, for the measurement of the modified mRNA the key questions, at the time for our bioanalytical lab, centered upon identifying a suitable assay, as well as understanding and demonstrating analyte stability during sample processing. Assessment techniques, such as quantitative RT-PCR (qRT-PCR) and branched DNA (bDNA) techniques, although used routinely to measure mRNA in academic evaluations were less familiar in quantitative bioanalysis labs. For our investigative bioanalysis, albeit keeping an eye on future possible regulatory utility, our group opted for bDNA; a choice partly based upon the techniques’ similarities with ELISA ligand binding assays and hence allowing the possibility to align the method characterization to the LBA bioanalytical guidance documents. A further advantage was that the bDNA assay could work directly with homogenized tissue extracts without the additional necessity to purify the mRNA first, and therefore potentially keeping the bioanalytical complexity to a minimum. The final piece in the puzzle was identifying simple, suitable blood and tissue sampling regimes, such as removing/inactivating blood nucleases during the sample collection and processing so that, most importantly, the potentially liable mRNA were intact when it came to the bioanalysis step.

Where we are today

Today we have routines in place to meet the needs of the diverse molecular portfolio both in-house for investigative support and with our CRO partners to manage regulatory facing and GLP bioanalysis. The interesting thing about these molecules is their constant evolution whereby molecules are modified to have specific-targeting properties, or indeed novel alternative administration strategies are routinely explored. In terms of ASO drugs, through the attachment of a targeting protein to the oligonucleotide via a linker chain, these molecules have a greater propensity to accumulate in specific target organ/cell types. More complex molecules, therefore, may require more complex or detailed bioanalytical strategies to be able to account for all the components in vivo (e.g. ASO-targeting protein complex, ASO alone and targeting protein alone).

In fact, for many of the oligonucleotide projects, our appreciation for the number of bioanalytical endpoints required to fully understand the safety, metabolism and PK/PD relationship for these drugs has substantially increased over the last few years. For example, with modified mRNA drugs, most of these projects are exploring lipid nanoparticle (LNP) encapsulation as a strategy to protect the drug entity from nuclease enzymes following ‘traditional’ administration strategies (e.g. subcutaneous injection or intravenous). The list of bioanalytical endpoints that may be required now include analysis of: (1) the mRNA, (2) the produced protein, (3) the LNP and (4) markers of immune activation in response to 1–3 (including anti-drug antibodies and inflammatory cytokine profiles). To further complicate the bioanalytical challenge, the different analytes can have incompatible sample processing procedures (e.g. extraction of mRNA from tissue uses proteases), which may have consequences on the overall study design and the ability to obtain enough analysable matrix (especially in small preclinical species). Moreover, it is also important to consider the potential holistic safety impact of these drug components through biodistribution assessments (in situ hybridization, immunohistochemistry and histopathology) and quantitative biodistribution in target safety and efficacy tissues. Investigating all these endpoints is of course ‘resource intensive’, so we have found that it is vital to clarify with preclinical project teams, which data is going to be the most informative and have the most value in progression of the drug through the pipeline.

What the future holds

As of today, more than 30% of the AstraZeneca drug programmes are actively exploring new modalities, and this figure will no doubt increase as the company further embraces the philosophy of ‘agnostic drug-entity approaches’ to find ‘the right drug’ to ameliorate diseases.  Indeed, there is a large drive to expand the array of novel delivery systems and to make drugs ‘smarter’ which will potentially open up other areas within the body/routes of administration (e.g. overcoming the challenge of dosing modified mRNA across the lung membrane). For the bioanalyst, this means more ‘weird and wonderful’ candidate drugs coming through the research and development pipeline, many with new analytical challenges that will require us to evolve and explore novel science and potentially more sensitive technologies.

For further reading, please check out “Bioanalysis – but not as we knew it: an AZ perspective of the last 10 years evolution to meet a diversifying portfolio” Hawthorne et al., Bioanalysis (accepted for publication 2019).

Infographic: the exciting world of oligonucleotides

Challenges and future predictions for oligonucleotide analysis: an interview with Hans-Peter Vornlocher

At long last, oligonucleotide drugs are close to deliver on their promise