How does chromatography work? 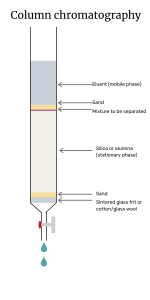 For example, in a simple liquid column chromatography system (see diagram), cotton wool or a glass sintered frit is put at the bottom of a glass column. The column is then packed with silica. There are different methods to pack the column, including dry packing or a silica slurry. The important factor is to ensure that silica is well packed, with no air bubbles or cracks as this will impede mobile phase flow. Once the silica is well packed, the mobile phase, often called the eluent, is added until it reaches the top of the silica. Following this, the mixture that is going to be separated is carefully added to the top of the saturated silica. A layer of sand is then added onto the mixture to ensure it is not disturbed by the addition of more eluent. The eluent (the mobile phase), which can be a solvent or mixture of solvents, is then continuously added to the system until the mixture has been separated. It is important to make sure the eluent level never drops below the top of the silica to prevent air bubbles entering the stationary phase and impeding mobile phase flow.

Silica, a common stationary phase, features Si-O-H bonds at the surface. Si-O bonds and hydroxyl groups mean that the surface of the silica gel (the stationary phase) is very polar, capable of forming hydrogen bonds and can also take part in van der Waals, dipole–dipole and dipole–induced dipole interactions.

Although several individual components in the mixture may be very similar and even capable of hydrogen bonding to the silica in the stationary phase, it is highly unlikely that they will hydrogen bond to the silica and interact with the mobile phase in exactly the same way. In complex chromatographic separations, co-elution (where multiple components elute from the column simultaneously) can occur. Through extensive and careful variation of the mobile phase, trialing different solvent systems and varying the pH, even some of the most complex mixtures can be separated into their individual components using simple liquid column chromatography.

What is chromatography used for?

As we have touched upon, chromatography is a separation technique and therefore the applications are wide and varied. Many scientists will find themselves performing some kind of chromatography work at some point in many projects. Chromatography can also be used as a purification technique to isolate the desired reaction product from a mixture of impurities.

Chromatography is also used as an analytical technique. By separating a mixture into its individual components, you can isolate substances present in a sample and then subject them to further analyses. Some forms of chromatography can detect substances present at the attogram (10-18 gram) level, making it an accomplished trace analytical technique.

Chromatography is unparalleled as a separation technique and even finds application in the petroleum industry. In this industry, it is used to analyze the complex mixtures of hydrocarbons found in petroleum. In the bioanalytical field, chromatography is widely used for the separation and identification of chemical compounds and therapeutic drugs.

What is gas chromatography?

As with all forms of chromatography systems, gas chromatography is a technique that requires the use of a stationary phase and a mobile phase. In the case of gas chromatography, the mobile phase is an inert gas, often helium or nitrogen. The stationary phase is usually a microscopic layer of liquid or polymer on an inert solid or support. This is housed inside a coiled glass or metallic tube which is also called a column. At the end of this is a detection system which detects the individual components as they elute from the column.

How does gas chromatography work?

Gas chromatography is a common technique but can only be used when the mixture can be vaporized without decomposition due to the requirement of a gas mobile phase. Once the complex mixture has been vaporized, it is injected into the column along with the inert gas mobile phase.

An author’s perspective: Amanda King-Ahmad on quantitation of the peptide-1 receptor agonist liraglutide