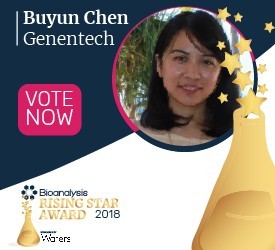 Supporting comments:
“I have been working closely with Buyun for almost four years as her supervisor at Genentech. She is a highly motivated scientist and active contributor to the bioanalytical community. In the past several years, Buyun evaluated and implemented multiple new technologies to improve and extend the capability of the bioanalytical group. One of the examples is that Buyun is the first person to launch the transporter quantitation platform in DMPK department. The quantitation of drug transporter is considered a critical step in in vitro to in vivo extrapolations, but quantitation assays were limited by the absence of pure protein standard and various extraction and digestion conditions. Buyun was able to collaborate with multiple functions and design a rigorous and systematic approach to optimize the conditions and finally setup the robust assay for the quantitation and resulted in successful characterization of multiple in-vitro and in-vivo research tools used by the company. Overall, Buyun is a creative and collaborative scientist and I am confident in her potential for success. I strongly support her for the Bioanalysis Rising Star Award 2018.”

1Describe the main highlights of your bioanalytical work.
For my doctoral research, I developed an ionization efficiency enhancement system for oligonucleotide therapeutics that could improve the bioanalytical assay sensitivity by 100 fold. I also simplified the biological sample extraction procedure for oligonucleotide by using one-step mixed mode solid phase extraction(SPE) or liquid extraction(LLE) followed by ethanol precipitation, which significantly reduced the process time(by over 50%) and enhanced extraction recovery. These mechanistic research and application studies resulted in several key publications (Chen et al, J. Am. Soc. Mass Spectrom., 2013; Chen et al, J. Chromatogr. A., 2013; Chen et al, AAPS J., 2012).
At Genentech, I spearheaded the effort to quantify drug transporters to support in-vitro and in-vivo research model characterization and PBPK modeling. I established a peptide selection procedure for accurate quantitation of drug transporters in both ‘absolute’ and ‘relative’ senses. By employing such strategy, I found the hepatic abundance of MDR1 transporter had been underestimated for over 10 times compared to previously reported data (Chen et al, AAPS J., 2017).
I am currently working on expanding the transporter quantitation platform to more transporters to enhance our understanding of quantitation of endogenous membrane proteins, such as distinguishing active form from inactive form or isolating proteins only from the functional locations.

After I started the research direction of enhancing oligonucleotide chromatographic separation and ionization efficiency by studying their analytical behavior with different combinations of ion-pairing agents, my lab and at least three other labs from different countries continued this type of research with both more depth and breadth. My publications on bioanalysis of oligonucleotides remains to be the most cited papers in this field since 2010. Due to the impact of the work, my publication on J Chromatogr A was selected as the outstanding manuscript award of AAPS APQ section in 2013.
My work on transporter quantitation also gained attention in ADME community. I am invited to present my work at Asian Pacific ISSX this year. As a member of the transporter focus group of Simcyp PBPK software I will be contributing transporter abundance data into the software database together with leading scientists from other major pharmaceutical companies.