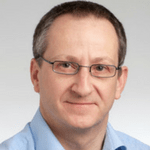 Bertrand Rochat obtained his PhD at the University of Lausanne (Lausanne, Switzerland). He continued his academic career with various post-doc periods in France, the United States and Scotland. From 2001 to 2003, Bertrand worked as Laboratory Head in the department of Pre-Clinical Safety at Novartis, (Basel, Switzerland), and has been in charge of the Mass Spectrometry Facility at the University Hospital of Lausanne in Switzerland since 2003. Bertrand works to help medical doctors and biologists in their research and whilst simultaneously developing his own research in the following areas:

Bertrand has published 50 original articles, editorials and reviews in these fields.

What molecules do you predominantly work with, and (how/why) do you use HRMS for their analysis? and Do you use HRMS predominantly for quantitative or qualitative analysis or both? Why?
During the last 15 years, I have performed quantitative and qualitative analyses of drugs, xenobiotics, endogenous metabolites and peptides. I use low-resolution mass spectrometers (MS) such as triple quadrupole (QQQ) and ion trap MS. Since 2012, I have tested new high-resolution mass spectrometry (HRMS) techniques and realized that, in addition to their first attribution (qualitative, discovery and identification analyses); they could perform excellent quantitative determinations. I spent a few years evaluating if HRMS (at least the ones I tested, Exactive and Q-Exactive MS) could be as efficient as QQQ-MS for quantification. My opinion was clear: HRMS was capable of performing analyses from targeted quantification to untargeted metabolomics [1]. Even if there are always some exceptions, the use of HRMS is a must. I believe that HRMS can be used for most, if not all LC–MS determinations whereas, in the future, low-resolution MS should (will) belong to some niche analyses. Importantly, I realize that HRMS will allow a step further in biomedical analysis because thousands of molecules can be recorded in a single run.

What are the main advantages of HRMS vs triple quadrupole MS?
The HRMS instruments that I have worked with showed similar quantitative performance than QQQ-MS [2, 3]. Importantly, in the comparisons from examples [2] and [3], HRMS data was acquired in HR-full scan mode and not in “narrow-minded” SRMs that were performed with QQQ-MS. Indeed, HRMS can be as sensitive and selective in HR-full scan than QQQ-MS in SRMs acquisition. Many other bioanalysts have demonstrated that the difference in quantitative performance between QQQ-MS and HRMS, is insignificant. This key point brings a shift of paradigm in LC–MS analysis because HRMS gives the most complete picture of what is in a biological sample. Taking into account that HRMS is renowned to be a key instrument for qualitative and discovery analyses, HRMS brings an additional value compared to QQQ-MS which is essentially restricted to quantitative determinations. HRMS is more versatile. From the global picture, dedicated software can reveal unexpected compounds in a sample. This can be used in various fields: toxicology, biomedicine, environment, water/food safety, etc.

I believe that HRMS is going to replace QQQ-MS for the vast majority of LC–MS analyses. Versatility, excellent quantitative and qualitative determinations and global acquisition are the key criteria. The use of HRMS for all LC–MS determinations simplifies workflows and allows a better translation between research and routine.

For more information and resources on HRMS, click here for our Spotlight

Do you believe that guidance from regulatory agencies is applicable and sufficient? What more could be done?
Many labs perform quantitative analyses with QQQ-MS under international certified rules. This means that, in general, there is a rather high degree of conservatism. Thus, it is not obvious that these labs will change their mind in favor of HRMS. Moreover, for some of these labs, the replacement of QQQ-MS by HRMS is really not useful: targeted HRMS acquisitions (SIM, PRM) are not better than SRMs on QQQ-MS. But for many other labs, the use of HRMS (performing HR-full scan) instead of QQQ-MS (performing ion transitions) can be truly useful because, on the top of targeted quantitative analysis (that can be performed on both QQQ and HRMS instruments), HRMS can bring additional, useful and unexpected information. Therefore, I believe that national authorities should understand the capabilities of HRMS (e.g. global acquisition and retrospective data treatment) and truly promote HRMS in certified analyses.

Are there currently any knowledge gaps within the field of HRMS? What could be done to overcome these?
I believe that one bottleneck is conservatism and the fear to change for a MS technology that had a weak reputation for quantitative performance. Nevertheless, the shift of the paradigm, consisting of the replacement of QQQ-MS by HRMS, is already under way in various laboratories including the pharma industry. In contrast, to the best of my knowledge, this is not really the case in clinical labs. I believe that this is a question of time. The pioneers will open the territory. The knowledge required to perform HRMS analysis is not more complicated than for QQQ-MS. There are already articles explaining how and why QQQ-MS specialists should go for HRMS.

What are the biggest challenges for adoption of HRMS in your field?
In clinical analysis, the main requests are from medical doctors and concern targeted and quantitative analyses of a few compounds. In this context, HRMS does not perform better than QQQ-MS and, therefore, there would be no advantages to shift! But HRMS can bring various unique analyses that can be useful to the patients and to clinical research projects. These additional determinations could not be undertaken with QQQ-MS. They are clinical and quantitative proteomics, metabolomics etc. The capabilities of HRMS have to be taught to medical doctors, clinicians and bioanalysts. Again, the pioneers will show the way…

Last year, 81% of respondents to our HRMS Spotlight survey believed that HRMS quantitative and qualitative analysis would increase. What are your opinions on the future of HRMS?
81% of responders believing that both quantitative and qualitative analysis performed by HRMS will increase is of great importance because, for their survival, MS manufacturers have to answer customers’ needs. Manufacturers have also to change their production line, to show that HRMS are user-friendly and robust for non-specialists and for routine analysis. The marketing of the MS manufacturer is changing slowly but surely: now, promotion for the quantitative capabilities of their HRMS instrument is better, and more affordable HRMS equipment is available. Soon, the opinion that QQQ-MS is for quantitation and HRMS is for qualitative (research/discovery/identification) will be seen as obsolete.

Tandem MS vs HRMS – can you have one without the other?
Ideally, you would want to have both in your lab, but all labs have limitations regarding purchase expenses and number of MS specialists required. The main question involves precisely defining the analytical needs. One other question is to establish whether the additional burden of having two different MS technologies is useful. QQQ-MS are still deeply anchored in a bioanalyst’s mindset. Not in mine! If I had to buy one MS instrument to start a new lab, I would buy a HRMS; if it was two,  I would buy two HRMS; if it was three, I would evaluate if I should buy a CE–MS, a GC–MS or a QQQ-MS.