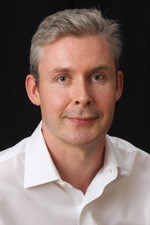 Robert MacNeill received his Bachelor’s degree with Honors in Chemistry from Heriot Watt University then his MSc in Analytical Chemistry from the University of Huddersfield, both in the United Kingdom. Robert is also a Chartered Chemist and Member of the Royal Society of Chemistry. With 18 years of experience in all aspects of quantitative bioanalytical LC–MS/MS method development, nine of these years heading method development activities within HLS/Envigo, and a regular author and peer reviewer for the journal Bioanalysis, Robert is a recognized expert and innovator in the field.

In his current role Robert coordinates all LC–MS method development and associated training, takes the lead in keeping abreast of innovation and technological development in the industry, leads in-house research projects and performs technical writing.

Previously in this column I discussed various pertinent aspects of cartridge-based means of biological sample extraction. With the notion of SPE being a technique that inherently offers a multitude of different selectivities, the liaison was made to the ideality of linking appropriate extraction selectivity to the analytical chromatography. It has become almost a cliché among method developers – ‘orthogonality of selectivity’ between biological sample extraction and subsequent chromatography. This refers to the desirable ability to combine at least two different means of analyte and interferential discrimination (i.e., selectivities), thus eliminating much more matrix residual interferences from the final sample compared to a situation in which the selectivities of the extraction and chromatography are analogous. This is all, of course, while maintaining high analyte recovery in the separate steps. In principle it is also much of what makes multidimensional chromatography so very useful, combining complementary chromatographic selectivities. Additionally, it counts for the most when the retentive modes are fundamentally different, for instance with the combination of a reversed-phase extraction complemented by something normal phase, such as hydrophilic interaction chromatography. Contrast this with a less ideal scenario where, for instance, there is a reversed-phase extraction using a polymer-based sorbent but then another reversed-phase dimension, the chromatographic setup that uses a silica base with hydrophobic bonded phase.

The sample preparative techniques of protein precipitation and dilution, being nonselective other than eliminating larger proteins in the former, are clearly less useful in the perspective of this concept than extraction techniques based on partitioning like liquid–liquid extraction or SPE. This is with the latter techniques operating with the inclusion, or otherwise, of adsorptive and/or electrostatic interactions. It is thus fair to state that having a method that features orthogonality doesn’t necessarily make up for a lack of selectivity in any given dimension.

There is little question that methodologies featuring orthogonality of selectivity are generally all the more rugged as a result. It is, however, as with so many things, interesting to think in more depth about the concept. Does it always hold true? The answer is likely not. In the laboratories here, there is a recent example of how one assay’s performance was actually improved by making the selectivity of the SPE closely analogous to the subsequent chromatography.

The analyte, a specific metabolite of cholesterol, had to be extracted from human serum. This was a steroid of inherently high lipophilicity and, as is the case for a great many steroids, with many closely related and high-concentration endogenous potential interferent compounds. The chromatography, prior to tandem mass spectral detection, had been set up as a silica-based C18 reversed-phase gradient conducive to analyte elution after five column void times and the run time was spaced out to 30 column void times. The mobile phase composition was particularly favorable for lipid elution in the latter end of each run cycle, in order to minimize chances of adverse lipid accumulation on-column and the signal drift that could subsequently manifest. The sample extraction was initially also reversed-phase, but on a popular polar-modified styrene-divinylbenzene copolymeric base. Issues with signal drift were observed with this setup, but then the switch was made to a silica-based C18 SPE procedure in conjunction with both matching the solvent composition choices and pH of aqueous modifiers with these of the LC, and a very careful minimization of elution volume while maintaining high and reproducible recovery. The signal drift issues were alleviated and, clearly, the C18 sorbent was a far closer match for the LC stationary phase. It seems very likely that this proximity in selectivity was responsible for the better performance of the assay. How can this be explained?

Any ionizable solute that is over-retained on the analytical column, that is to say a potential interferent and not eluted over a single gradient-and-hold cycle, is going to be responsible for some degree of signal drift as it infuses from the column outlet over subsequent gradient cycles. By replicating this process at the stage of sample extraction, such compounds remain on-cartridge thus are absent from the final sample extract and cannot exert any deleterious effect that they may do otherwise. Additionally, in this case, there is still the inherent cleanliness from a well-optimized SPE protocol. However, It should be noted had there been any interferences that coeluted with the analyte in the analytical chromatography and affected the signal, this extraction would have been very unlikely to have been suitable, and perhaps a variant reversed-phase bonded phase to the two tested would have merited investigation. It could also very well be proposed that perhaps a HILIC extraction would have been better-suited as a more distinct selectivity, but it’s out of the question to attain any kind of sufficient retention in this mode for a compound like this, of such high hydrophobicity and lack of basic moieties in the molecular structure.

The concept of orthogonal selectivity is well-known in the bioanalytical community, and for good reason. Long may it be utilized in the interests of generating truly reliable data. Still, a certain degree of flexibility should be maintained in its application as is evident from the likes of the example illustrated here, with the caveat that both extraction and analytical chromatography show decent selectivity conducive to a good degree of interferent elimination or resolution.

An author’s perspective: Amanda King-Ahmad on quantitation of the peptide-1 receptor agonist liraglutide

MARS: bringing the automation of small-molecule bioanalytical sample preparations to a new frontier