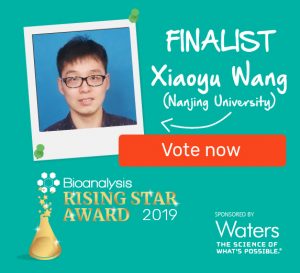 Supporting comments:
“Xiaoyu is a PhD candidate in my research group in the Department of Biomedical Engineering at Nanjing University. I have been working closely with him for 4 ½ years. His work is focused on the development of high performance nanozymes for bioanalytical applications. In the past several years, his research work greatly promoted the development of nanozyme bioanalysis. Xiaoyu developed a straightforward and predictive activity descriptor for guiding the search for highly active peroxidase mimics, which provided the basic research for nanozyme bioanalysis. This interesting work was published by Nature Communications, which attracted great attention after publication and was highlighted by Phys.org. Besides this project, he also developed nanozyme sensors and sensor arrays for versatile analytes from bioactive small molecules to proteins and even cells. Some of these results have been published in Analytical Chemistry and Theranostics. He has won numerous prestigious awards, such as ‘The National Scholarship for Graduate Students’ and ‘2018 Baxter China Young Investigator Awards’ because of his academic achievements. Overall, Xiaoyu is a creative and collaborative researcher and I am confident in his potential for future success. Therefore, I most strongly and enthusiastically support his application for this prestigious Bioanalysis Rising Star Award.”

During my first bioanalytical study, I developed a ratiometric electrochemical biosensor for ascorbic acid detection. The obtained ratiometric response can substantially overcome intrinsic systematic errors of traditional electrochemical sensors and thus improve the reproducibility and robustness.

Previous ‘one-to-one’ nanozyme biosensors are generally based on the pre-selected bio-ligands for specific recognition, which may not be available for the emerging analytes. To detect emerging analytes without pre-selected bio-ligands, I constructed nanozyme sensor arrays for detection and fingerprint identification of bioactive molecules, proteins and cells. Moreover, I developed nanozyme sensor arrays for tracking patterns to follow real-time biologically related events.

Winner of the 2019 BOSCA announced!