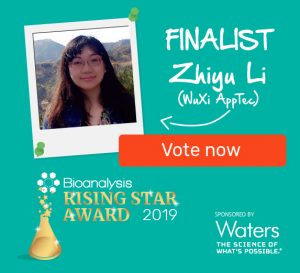 As the head of our new capability building team, Zhiyu has led her team in the development several new bioanalytical platforms, including the LC—MS based large molecule analysis platform. This platform has been applied in more than 300 projects and has led a new trend among competitors. Zhiyu has been heavily involved with cross-functional and cross-division collaboration in WuXi AppTec. Zhiyu and her team has transferred new platforms to the Toxicology and GLP Bioanalysis department. And she has co-managed the collaboration between our department and the Clinical Diagnostics department. Zhiyu has given presentations at multiple national and international conferences and participated in the bioanalytical community. Because of her excellent work, she was quickly promoted to the position of Principle Scientist II and Associate Director.

Overall, Zhiyu has made multiple scientific advances that have significant impact in WuXi AppTec as well as in the bioanalytical community. I strongly support her in the competition for the Bioanalysis Rising Star Award.”

Since joining WuXi AppTec in August 2016, I am responsible for developing analytical methods for challenging projects, introducing new technologies, and building new capabilities for the non-GLP bioanalysis unit in the DMPK department of the Lab Testing Division.

I have had the opportunity to develop and validate the first LC—MS based large molecule bioanalysis platform in China, which had been used in more than 300 projects thus far. Moreover, I have set up the first dry plasma spot assay platform for pharmacokinetics in the world, which is quite useful for the sampling of water- or enzyme- unstable compounds. Third, I have developed a new type of chromatography, mobile sorbent affinity chromatography, by introducing a third phase, the analyte sequestering transport phase, into the traditionally two phase liquid chromatography system, in which only the target analyte elutes first within a short time, while all the nonanalytes are retained.

Thus far during my first bioanalytical job, I have published two peer-reviewed papers, supported the application of one patent, and presented five posters at international conferences such as Clinical & Pharmaceutical Solutions through Analysis (CPSA), International Society for the Study of Xenobiotic (ISSX), and American Society of Mass Spectrometry (ASMS).

People behind the science: an interview with Caitlin Dunning and Nikunj Tanna (Waters)