Login
Bioanalysis Zone
By: Lin Wang, with the assistance of Robert MacNeill (both Covance, NJ, USA)

In this Learn with Lin article, Zone Leader Lin Wang (Covance, NJ, USA) explores some of the key terms in LC–MS that form the foundations of a good understanding of the bioanalytical applications of this technique. Part I discusses the realm of biological sample preparation, focusing on different methods and possible interferences. 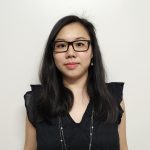 Lin Wang received her Bachelor of Science degree in Chemistry from Xiamen University in China and Master of Science in Chemical Engineering from Rutgers University in New Jersey, USA. She is also enrolled in the Business and Science Program at Rutgers University to develop a comprehensive understanding of the interface between science and business and look at the revolution of analytical industry from different perspectives.

She started her career with Envigo (NJ, USA) in the department of Formulation and Inhalation Analysis and is currently the Research Associate II at Covance. She has been working in the CRO industry since 2015 and focusing on method development and validation on both small and large molecules.

Bioanalysis serves an essential role in drug discovery and development. It provides a quantitative measurement of drug concentration in biological matrices like urine, plasma and tissue samples to help gauge important parameters like bioavailability. Bioanalysis also involves metabolism, and ties all of this into the toxicokinetics/pharmacokinetics for a given application [1].  It is estimated by Grand View Research, Inc (CA, USA) that the global bioanalytical testing services market will reach USD 4.83 billion by 2026 [2]. Bioanalysis is a booming industry.

I have spent almost 5 years in dose formulation analysis and recently developed a great interest in bioanalysis. What inspired me to write this article, from a beginner’s point of view, is that when I tried to get to know this field, I couldn’t find a ‘one-stop shop’ to answer all my questions and explain the deep principles behind everything. I hope this article can help more chromatography fans like me who also crave some fun in the bioanalytical world.

Let’s start with a modest selection of basic terms which are fundamental and unique in bioanalysis, with an emphasis on what is new to me, the realm of biological sample preparation.

Sample preparation for bioanalysis is critical and often challenging due to the potential difficulty of the selective extraction of the analyte of interest from the matrix and the time involved. Besides, each kind of matrix has its own obstacles. For example, there is a high level of salt in urine. Phospholipids and other components in plasma can cause matrix effects, enhancing or suppressing the analyte response [4].

Here we will discuss four commonly used extraction methods and their pros and cons.

LLE is based on the differing extents the compounds of the sample mixture partition themselves between two immiscible solvents, following the rule ‘like dissolves like.’ As per the most common application, if the analyte of interest is more favorable in organic solvent than in aqueous solvent, which can be measured as KD (distribution factor), the analyte will be mostly extracted to the organic phase and isolated. Ideally, interferences will be left in the aqueous phase.

For a typical biological sample extraction, the key steps are as follows when performing LLE:

SLE is a modified LLE method and still follows the partition rule between two immiscible solvents. The major difference is that the aqueous phase in SLE is immobilized on an inert support and deposited as a thin film on the hydrophilic surface. The extraction occurs between this very thin aqueous film and an organic solvent, which is more efficient due to the enlarged interaction surface, compared to the shaking and mixing process utilized in LLE. The traditional support material is diatomaceous earth, a natural silica-based sediment formed from the fossilized remains of diatoms. However, recently synthetic material has been developed as an alternative. 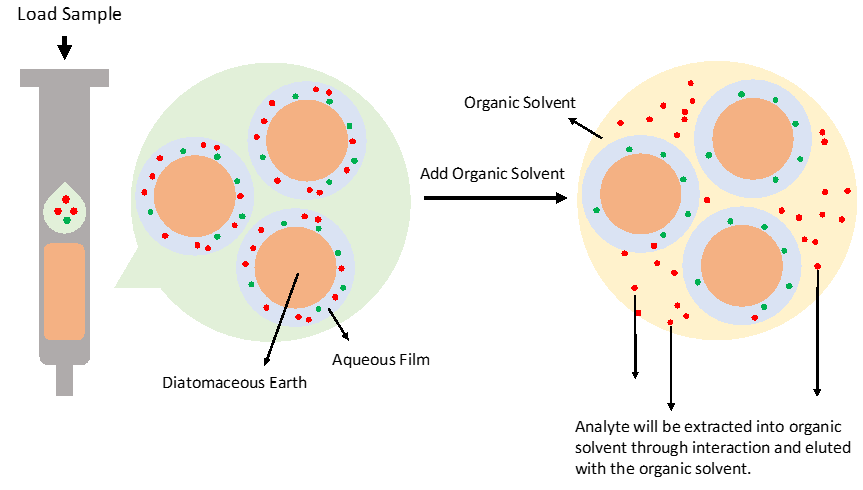 SPE is a sample preparation technique that uses selective adsorption, washing and elution to enrich and purify samples through their interaction with a solid medium of specific chemistry, which is akin to the familiar principles of column chromatography.

The basic procedure is, after conditioning and equilibration, to have the liquid sample pass through the sorbent and retain the analytes of interest therein. Then to use solvent with suitable eluotropic strength to wash away impurities and ultimately to efficiently elute the analyte with an optimally small amount of the eluting solvent. It can also selectively strongly adsorb interference impurities and let the analyte elute whilst the interferences are retained beyond the elution step. 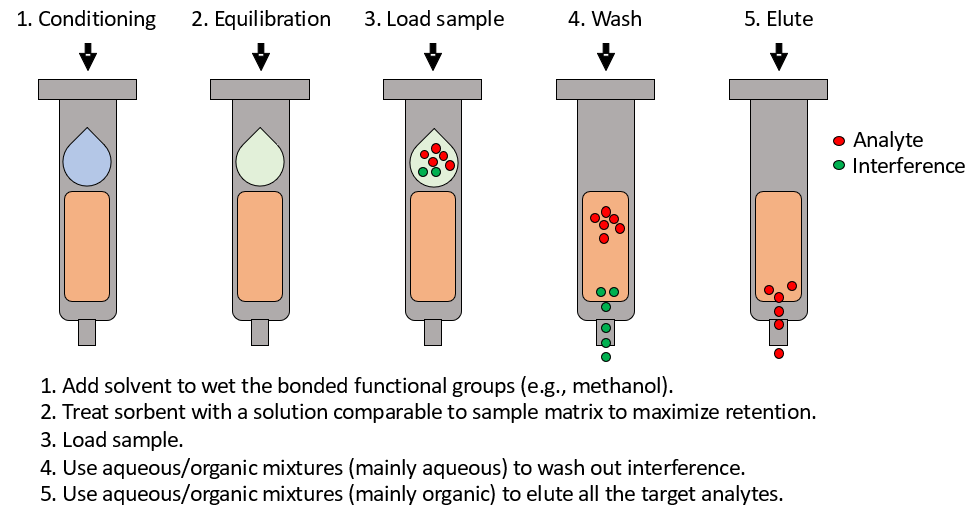 PPT is commonly used in bioanalysis to separate the larger protein content from the remainder of the sample to eliminate this principal instrument-fouling component.

When protein is in an aqueous solution, a solvation layer or hydration layer of water molecules will form around the protein’s hydrophilic surface residues through hydrogen bonding and ion-dipole bonding [5], which facilitates protein dissolution and prevents protein aggregation. When a precipitating agent is added, this layer will be disrupted, which will cause aggregation and precipitation to occur. For example, adding an acid will make -COO– become -COOH, which will destroy the hydrogen bonds formed around the protein and inside the protein, resulting in the destruction of the water hydration layer and the denaturation of protein; adding a miscible organic solvent will replace some of the water molecules surrounding the protein, causing the hydration layer to break down [6].

The following steps for a PPT extraction would be to vortex-mix and centrifuge the precipitated sample and obtain a clear supernatant. The supernatant can be dried and reconstituted in mobile phase for injecting. 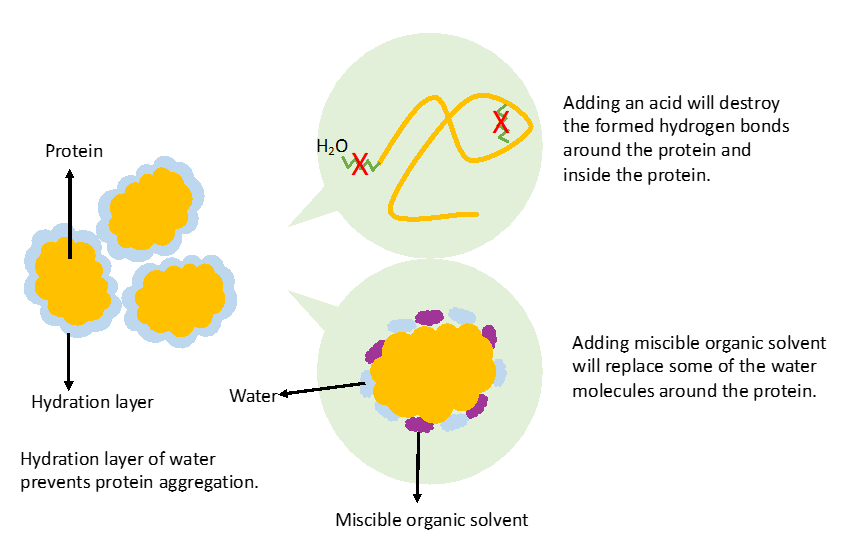 Matrix effect is most commonly referred to as the interference on the transition to the gas-phase of the ionized analyte caused by competition from co-eluting biological matrix components [8], which includes ion suppression and ion enhancement, ion suppression is more often encountered. The intensity of the analyte will decrease or increase in line with the degree or extent of matrix effect. Several proposed mechanisms to explain ion suppression are as below [9]:

However, for ion-enhancement, although very real, the mechanism has not been fully depicted yet. It is also necessary to use a matrix from at least six individual donors and evaluate what is known as the differential matrix effect [10].

Matrix factor is defined as an approach to evaluate matrix effect [11].

a Post-extraction spiked samples: Blank matrix samples are extracted first and then spiked.

b Standard solution samples: Neat standard is dissolved in a selected solvent with no matrix added.

Hemolysis often occurs during collection and processing of blood samples. The lysis of red (and white) blood cells leads to the release of more endogenous substances into the plasma, resulting in additional potential matrix effects. Hyperlipidemic plasma may contain a high level of fat content, for example, triglycerides, cholesterol or phospholipids or lipoproteins. These contents will make the assay more challenging with more lipid-based interferences, not to mention introducing more difficulty to attain a good homogenous matrix aliquot and clean extracts.

Recent guidelines like the 2012 ‘Guideline on Bioanalytical Method Validation’ from the European Medicines Agency (Amsterdam, Netherlands), have recommended the investigation of matrix effects in special matrices such as hemolytic and hyperlipidemic plasma.

The two main approaches for the investigation are:

Prepare a batch of samples with known concentrations in hemolytic or hyperlipidemic plasma, then analyze and evaluate their precision and accuracy.

Blank hemolytic or hyperlipidemic plasma will be extracted and then spiked with standards. The response will be compared with ‘normal’ plasma or matrix-free solutions.

If the method will also be used to analyze the diluted sample, dilution integrity should be tested to ensure the response of the sample will not be adversely affected by dilution. This is achieved by diluting QC samples at a concentration higher than the upper limit of quantification with biological matrix to be within the calibration curve range. Accuracy and precision of these diluted QCs should be demonstrated after extraction.

It is crucial for bioanalysts to test the stability at all stages of the production and processing of the sample. There are many kinds of stability tests involved, for example, freeze-thaw stability, extract stability as well as short- and long-term stability of QCs. However, whole blood stability may sound unfamiliar for people who are new to bioanalysis. To test whole blood stability is to test the time period between the time point when blood is drawn and the time when the blood is centrifuged to harvest the plasma [14]. It is to ensure the analyte is stable in whole blood and will not be significantly absorbed into cellular components during collection.

One approach for assessing whole blood stability is to pre-warm the whole blood to 37°C and then spike the analyte solution to the blood to make the concentration levels competitive to LQC and HQC. The organic components from the analyte spiking solution must be kept at a minimum level to avoid hemolysis and degradation. After mixing and equilibrating, the blood sample will then be transferred on ice and then the plasma harvested by centrifugation. The harvested plasma from different time points will then be extracted, analyzed and compared.

We have looked at some exclusive terms and knowledge that are synonymous with most bioanalytical method validation that you will encounter. They are demonstrated in the context of either why we need the terms or how to carry out the processes. Make sure you don’t miss the next instalment of ‘Learn with Lin about bioanalysis,’ coming soon!

[1] Aubry A-F, Shen J X. Bioanalysis and where does it fit into the drug development process? In Bioanalysis for Service Users. Future Science Book Series, London, 6–16 (2013).