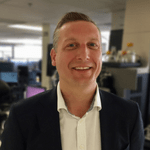 Dr Ian Edwards is the technical marketing manager for HRMS small and large molecule bioanalysis at Waters Corporation (MA, USA). Ian has an academic background in the application of mass spectrometry and stable isotope labelling to measure protein turnover in animals, and in his early career in industry worked with MALDI-TOF MS systems for protein identification, molecular imaging and microbial identification. Ian spent several years in the Waters European Applications Laboratory working on a range of HRMS applications including metabolomics, proteomics, molecular imaging and large molecule bioanalysis (therapeutics and biomarkers). He is currently focused on the use of HRMS for large molecule bioanalysis including the emerging application area of intact protein quantification.

What molecules do you predominantly work with, and (how/why) do you use HRMS for their analysis?
We work a great deal with large molecules using LC–MS. This has been driven by the increase in the development of peptide and protein therapeutics. In drug metabolism pharmacokinetic (DMPK) studies, analysts are concerned with the clearance of a drug after administration, and also how it is metabolized. Measuring the clearance of a peptide or protein requires quantification at multiple intervals postdose. The classical approach for large molecule quantification is by ligand binding assay because of its ease of use and throughput advantages. However reagent specificity and cross-reactivity are two concerns with this technology. LC–MS has emerged as a viable alternative or complementary technique because of its inherent specificity that results from direct mass measurement. Large proteins are typically analyzed following tryptic digestion using the surrogate peptide approach. Today, the gold standard for large molecule quantification by LC–MS is still tandem mass spectrometry using triple quadrupole mass spectrometers, where plasma samples are often analyzed in combination with immuno-affinity purification. However, the high mass resolution and accuracy afforded by high-resolution mass spectrometry (HRMS) can translate to higher sensitivity when selectivity is challenged by, for example, interference from endogenous species. An alternative to the surrogate peptide approach is the quantification of the whole molecule at the sub-unit or intact level, and these methods are being explored more and more. The benefit is the maintenance of molecular integrity, where HRMS, with its extended mass range, is ideally suited for intact mass detection and quantification of larger proteins such as monoclonal antibodies.

What are the main advantages of HRMS vs triple quadrupole MS?
It really depends on the analytical question. A triple quadrupole mass spectrometer for routine quantitative bioanalysis of small and large molecules using a validated assay is hard to beat. In addition, technicians and analytical scientists are comfortable operating this technology. A few advantages of HRMS for large molecule bioanalysis include high mass resolution detection of peptide fragments, for challenging samples, and when interference from endogenous species is a problem. Secondly, quantification of large proteins (> 15 kDa) at the intact level, using the extended mass range, is something that cannot be done with current triple quadrupole mass spectrometers. Adding to this, there are simply some questions only HRMS can answer, and these are typical of a qualitative nature, for example; large molecule metabolite identification and biopharmaceutical characterization.

For more information and resources on HRMS, check out our Spotlight

Do you believe that guidance from regulatory agencies is applicable and sufficient? What more could be done?
Guidance from regulatory agencies is geared toward established chromatographic methods (small molecule) and ligand binding assays (large molecule), but they also have the scope to cover LC–MS. This leaves the sponsor to work within the constraints of the guidelines, which state clearly that for data supporting regulatory submissions, the method should be fully validated according to the validation acceptance criteria. For protein quantification by LC–MS/MS using the surrogate peptide approach, consensus recommendations from the bioanalytical industry exist to guide analysts in developing a validated assay. For emerging techniques such as intact protein quantification, dialogue, and recommendations from industry panels will be required to help guide how to approach the development of assays including data processing standards.

Are there currently any knowledge gaps within the field of HRMS? What could be done to overcome these?
I think a bioanalytical group with years of experience in small molecule bioanalysis and triple quadrupole mass spectrometry need to approach HRMS with their eyes open. The technology can add flexibility to answer more analytical questions, but there are also operational differences to consider including instrument setup, data acquisition, and data processing that will be new for someone coming from a triple quadrupole mass spectrometry background. With the right resources, training, and education, the learning curve can be reduced, and the technology made accessible. For emerging applications like intact protein quantification, there are different options for data processing including extracting the signal directly from the raw data, or through deconvolution algorithms of which there are many. I envisage practitioners in the community will come together over time with guidelines for best practice.

What are the biggest challenges for adoption of HRMS in your field?
As the technology becomes more accessible to non-experts, adoption will become more commonplace for large molecule bioanalysis – especially to answer both qualitative and quantitative questions, such as quantification alongside characterization of in vivo biotransformation. For emerging applications like intact protein quantification, the biggest barrier to adoption might not be the technology itself but a combination of new developments in sample preparation and chromatography to achieve the required quantitative performance, not to mention informatics solutions.

Are there any other challenges or limitations that interfere with your work that HRMS could assist with?
As mentioned, ligand binding assays are the classical route to protein quantification. However, specificity of reagents and cross-reactivity are two concerns with this technology. The big play for LC–MS is that it can serve as a reference method to validate ligand binding assay specificity; for example, intact protein quantification using HRMS as a direct quantitative measurement of the whole molecule shows great promise as an alternative or complementary technique for validation of ligand binding assays.

Last year, 81% of respondents to our HRMS Spotlight survey believed that HRMS quantitative and qualitative analysis would increase. What are your opinions on the future of HRMS?
I think the future is bright for HRMS. I believe the technology will diverge along two routes. As some applications become routine and analytical performance requirements plateau, more emphasis will be placed in development on making the systems easier to use – opening up accessibility to non-experts and mitigating the risk of losing ’trained’ hands during critical projects. Ion mobility, as an example, combined with mass detection is a powerful combination that has become a routine option today providing improved spectral clarity when making assignments of data points, for example, metabolite identification in complex matrices. At the other end of the scale, newer systems with higher performance capabilities to solve harder to answer research questions will continue to emerge.

Tandem MS vs HRMS – can you have one without the other?
For a DMPK bioanalytical lab, I think both triple quadrupole and high-resolution mass spectrometers have their place. As mentioned, the ruggedness of triple quadrupole mass spectrometers and their general performance is suited to routine analysis. The additional power of HRMS for large molecule bioanalysis can translate to increased sensitivity when selectivity is challenged, and data independent acquisition modes are useful for screening candidate surrogate peptides when quantifying proteins using the surrogate peptide approach. In addition, acquiring quantitative and qualitative data in a single experiment is a powerful way to identify and quantify drug-related material without prior knowledge. An additional capability of HRMS is the flexibility to provide quantitative data for large molecules at the intact, sub-unit, and surrogate peptide level.

Both LBA and LC–MS have their place in drug discovery and development. What is the advantage of using them as complimentary tools?

31 MAY 2010 COLLABORATIONS AND MERGERS