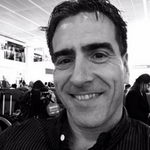 Having studied for a PhD and post doctoral fellowship in proteomics, Scott moved into the field of regulated Bioanalysis in 1997 when joining SmithKline Beecham. In 2001 Scott moved to Neuroscience Drug Discovery to lead a bioanalytical team supporting PK, in vitro DMPK and metabolite id work. In 2009 he returned to the regulated bioanalytical group, initially as a Section Leader and subsequently as Site Head and currently as Worldwide Head of Bioanalysis at GSK (Ware, UK).

Scott has experience of small and molecule bioanalysis as well as leading both bioanalytical and discovery and development project teams across GSK.

What molecules do you predominantly work with, and (how/why) do you use HRMS for their analysis?
Our group analyzes small and large molecules by means of LC–MS. Currently, the HRMS systems are used almost exclusively for large molecule bioanalysis while small molecule bioanalysis has focused on tandem quadrupoles. A number of factors have favored the continued utilization of Lo-Res tandem MS for small molecule bioanalysis, but in my opinion, the most prevalent reasons have been (1) better overall instrument sensitivity and (2) availability of instrument time, because the proportion of HRMS instruments is low in most bioanalytical facilities (< 10%). With the most recently HRMS system we purchased, there are no real scientific barriers to prevent us moving small molecule work to this platform, other than we only have one and it’s busy doing protein work!

On the other hand, the selectivity of HRMS can be beneficial with peptides and proteins because the collisionally-activated dissociation process tends to produce complex MS/MS spectra with multiple competing fragmentation pathways. This was a fantastic benefit for the emergence of proteomics and MS-based protein sequencing, but reduces sensitivity for MS/MS-based quantitative bioanalysis.

Do you use HRMS predominantly for quantitative or qualitative analysis or both? Why?
The structure identificationof small molecule metabolites is well covered within the spectroscopy department of our company. But no protein handling, immunocapture or large molecule MS skills are centralized there and so the synergy rests within the bioanalytical function to perform the equivalent work on large molecules. In our division immunogenicity and exploratory biomarker support sits alongside bioanalysis so all the necessary skills sets are close to hand.

What are the main advantages of HRMS vs triple quadrupole MS?
Many mass spectrometry applications, past and present, rely on high resolution to achieve sufficient selectivity. Bioanalysis just demands more things like fast run times and low limits of quantification. The main reason tandem MS has dominated quantitative bioanalysis is based on the availability of an instrument platform that can guarantee adequate selectivity and sensitivity.

It’s important to remember that one innovation in bioanalysis follows another. The genesis of electrospray ionization (ESI) allowed a much wider range of molecules to be analyzed by means of mass spectrometry, including small molecule drug candidates (and metabolites). But the ESI process is ‘soft’ and imparts little internal energy into the resulting ions. Back in the day, most MS and tandem MS work was performed on sector mass specs that could work at high resolution but these systems did not cope very well with the high gas loads in the ion source/ionization interface, the scan speeds were slow and the level of expertise needed to tune and maintain high resolution was high. So, tandem quadrupoles became the preferred partner to ESI because they were more tolerant to higher gas pressures and the scan speeds were fast when coupled to collisionally-activated dissociation Using MS/MS enhanced the selectivity lost to switching to the lower resolution quadrupole platform.

That said, the duty cycle of tandem quadrupoles may always offer an advantage for the highest sensitivity applications.

For more information and resources on HRMS, check out our Spotlight

Do you believe that guidance from regulatory agencies is applicable and sufficient? What more could be done?
Regulators base their opinions on the filings that come across their desks. If we, as an industry present a good scientific rationale for the selection of HRMS and show a convincing package of method and system validation then the regulators will accept the case.

Are there currently any knowledge gaps within the field of HRMS? What could be done to overcome these?
Instrument vendors have spent a lot of resources improving the software and hardware platforms that run HRMS systems (both TOF and traps). As an industry, we employ a lot of skilled graduates and/or scientists with Masters or PhDs. So, I cannot believe this caliber of scientist would struggle to pick up the necessary skills to run HRMS systems.

The biggest issue I see is routine availability to HRMS. We’re in this period of stagnation ‘it’s a good idea to use HRMS but we don’t want to jump first and make all the mistakes of early adoption’. I don’t think any level of regulatory guidance can get us over that hurdle, between industry and CROs we have to work out how to take the plunge together.

Are there any other challenges or limitations that interfere with your work that HRMS could assist with?
I think there’s a lot HRMS can do around understanding drug disposition at the level of tissues or subcellular fractions. The ‘Three Pillars of Drug Development’ (drug at target, target engagement and demonstration of pharmacology) will place very different questions in front of bioanalytical groups’ perhaps half way between what we see as quantitative and qualitative applications.

In the immunogenicity area, there are great opportunities for new combinations of MS and immunoassay, such as characterizing immune complexes.

For the analysis of oligonucleotides, HRMS seems to be the better option because the fragmentation of the nucleotide bases tends to produce very non-selective low m/z fragment ions.

Last year, 81% of respondents to our HRMS Spotlight survey believed that HRMS quantitative and qualitative analysis would increase. What are your opinions on the future of HRMS?
Almost certainly, the utilization of HRMS will increase because instrument performance is improving rapidly in terms of sensitivity, dynamic range and speed. Small molecule bioanalysis is likely to focus on TOF-MS because the resolution achievable on these systems fits well with the masses of small molecule drugs. It’s likely that surrogate peptide bioanalysis [of protein therapeutics] be performed on TOF-MS systems as well because of the modest instrument cost. But larger molecular species, such as IdES clipped fragments, might require higher resolution ion trapping systems.

Like always, the time and effort dedicated to the evolution new instrument modalities are driven by what the manufacturers see from industry; the more we use HRMS, the more opportunity they will recognize for future sales growth and in turn drive toward new innovations. But there is an emergent issue in bioanalysis around the balance of work supported internally and externally at CRO. For many companies, CROs are the ‘majority shareholder’ with respect to bioanalytical support. If Pharma doesn’t generate more early HRMS methods to transfer then it’s hard for CROs to ‘jump first’ in the face of huge regulatory headwinds.

Tandem MS vs HRMS – can you have one without the other?
Tandem MS and HRMS both convey selectivity to the bioanalytical method. So, the question is really what level of selectivity is needed? I think the world of bioanalysis will have both tandem MS and HRMS capability but maybe the lab of the future will be comprised of a different balance than today.

6. What are the biggest challenges for adoption of HRMS in your field?

31 MAY 2010 COLLABORATIONS AND MERGERS