Q) What is mass spectrometry?

A) Mass spectrometry is an analytical technique that is used to measure the mass-to-charge ratio of ions. A mass spectrum is produced to visualize this ratio, which enables researchers to identify and quantify molecules in both simple and complex mixtures.

Q) How does mass spectrometry work?

A) A mass spectrometer works in four steps: ionization, acceleration, deflection and detection. The sample vapor is first ionized and then accelerated through charged plates. It is then deflected by electromagnetism into the detector. The amount that each ion is deflected is dependent on the mass. This difference in deflection is what creates the mass-to-charge ratio and mass spectrum that can be analyzed. 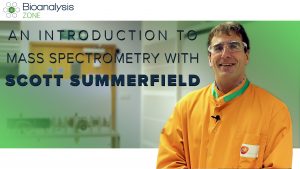 To find out more about mass spectrometry watch our methodology video exploring the key principles.

Q) What is high–resolution mass spectrometry?

Q) What is drug metabolism and pharmacokinetics (DMPK)?

A) DMPK is a core scientific discipline that covers drug discovery and development in order to try and understand how a drug will work inside the body beyond just the specific target interaction. It includes how much  drug will reach the cell (pharmacokinetics) and what form the drug will arrive in (drug metabolism).

Q) What can mass spectrometry tell you about a protein?

Q) Why is high-resolution mass spectrometry important for DMPK?

High-resolution mass spectrometry techniques are progressively allowing large molecule drug developers to better understand and identify multiple attributes that can contribute to a drug’s effectiveness including the link between molecular details and function. The high-throughput of high-resolution mass spectrometry allows for faster analysis in both early and late stages of DMPK studies whilst simultaneously achieving high quality results.

8. Last year, 81% of respondents to our HRMS Spotlight survey believed that HRMS quantitative and qualitative analysis would increase. What are your opinions on the future of HRMS?